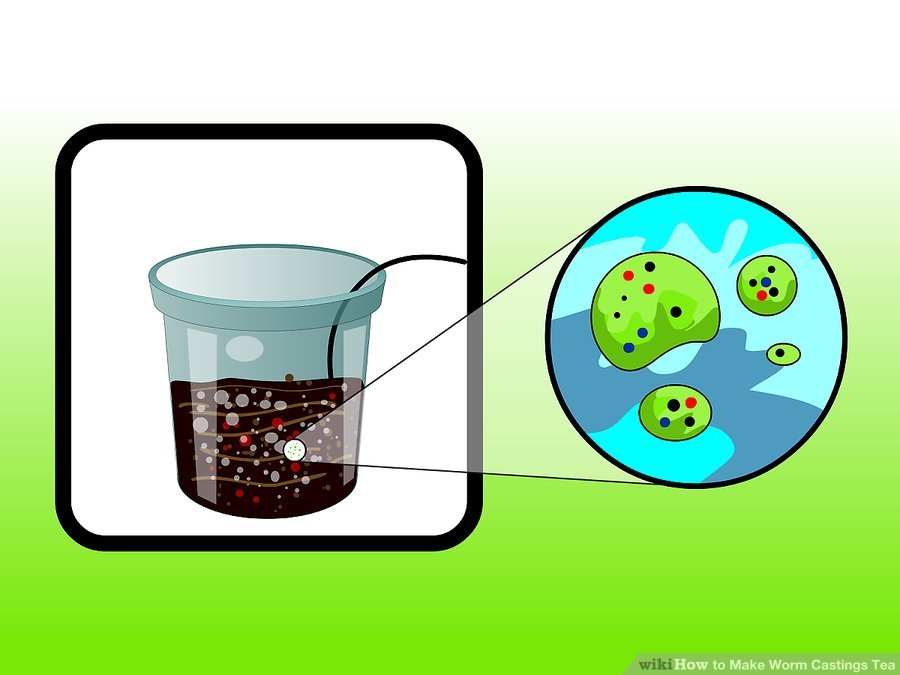 Worm tea may not sound too appetizing but your plants will really love it. You can buy this amazing organic fertilizer here in Watsonville at Whiskey Hill Soils. Worm tea lets you fertilize without adding bulk to your soil and water your garden with something really “nutritious” for your plants. Your garden will practically jump up and shout “Hallelujah!” when fertilized with worm castings tea, and you will be amazed at the growth and flowering that results.

Fill a 5-gallon bucket with water.

Either use rainwater or let the water stand so the chlorine can evaporate out. You don’t want to kill the beneficial micro-organisms, which is the point of municipal chlorine. Using a bubbler will speed up the release of Cl- ions from the water, cutting down the time the water needs to stand.

Add the corn syrup or molasses to the water. This will serve as food for the micro-organisms. It helps to dissolve the molasses in a small volume (like half a cup) of hot water before adding it to the bucket. This prevents potential obstruction of your air bubblers.

Place castings in the bucket by either:

Realize the grade or particle sizes of your choice of castings (determined by source and packaging process) play a role in making this choice. Casting particles in sizes larger than marbles, or even bark mulch. Others are finely ground castings, smaller than ball bearings. The difference in total surface area exposed to water is much larger for the finely ground which has more exposure to the aerated water.

Put the worm castings in directly into the bucket. Some people say put the castings in an old sock or stocking hose that has no holes and tie the opening closed. This does not allow the castings to exchange into the water freely and slows the growth of the micro critters. Both ways give satisfactory results with the castings right in the water. Also, slime mould formations which are micro critter super colonies, may form. This shows the intense populations of tea made this way. You can use a plastic watering can without the strainer on the end and apply the tea in total – castings and all.

Use a bubbler like an aquarium pump and air stone if you have one. Place it in the the bucket and hold the air stone to the bottom with a rock. Plug in the bubbler so the the water is aerated.

Let water and castings bubble (or at least soak) for 24 hours. If you don’t have a bubbler, consider stirring occasionally- don’t worry you cannot hurt the micro critters (microbes) by stirring. The air stone at the bottom of the bucket will cause the tea to be in constant mix – this is the best way to get a high yield tea.

To produce high yield tea, conditions should be desirable for the microbes to proliferate, multiplying exponentially. The microorganisms from the digestive system of the worm are extruded in their castings. These aerobic (oxygen-dependent) microbes are “good” microbes for plants (nature’s way). Bad microbes are typically anaerobic (oxygen kills them) and many give off offensive odors as they release byproducts of metabolism like hydrogen sulfide (rotten egg smell). Aerating the tea improves conditions (agitation, circulation, aeration) for the good microbes, which enhance (survival, reproduction, growth). Aeration helps suppress the presence or growth of bad “bugs” that will compete against the good ones. Use of a bubbler helps along dissolution of the molasses food as well; it dissolves and diffuses more rapidly. Some instructions for tea setups without a bubbler recommend up to three days of brewing.

Use within 48 hours. Exponential populations in limited spaces eventually peak and then plunge with massive population loss. We want the tea to be biologically active, alive, with good microbes like Bacillus subtilis. To avoid losing the beneficial microorganisms you created, use the worm compost tea as soon as possible.

Refrigerate (in a sealed, labeled container) for up to 3 days. Non-pleasing odors from the tea after initial brewing or prolonged refrigeration may signal a low quality brew which should probably be dumped. This could be added to a composter or wormery to prevent waste.

Material is available under our Creative Commons license