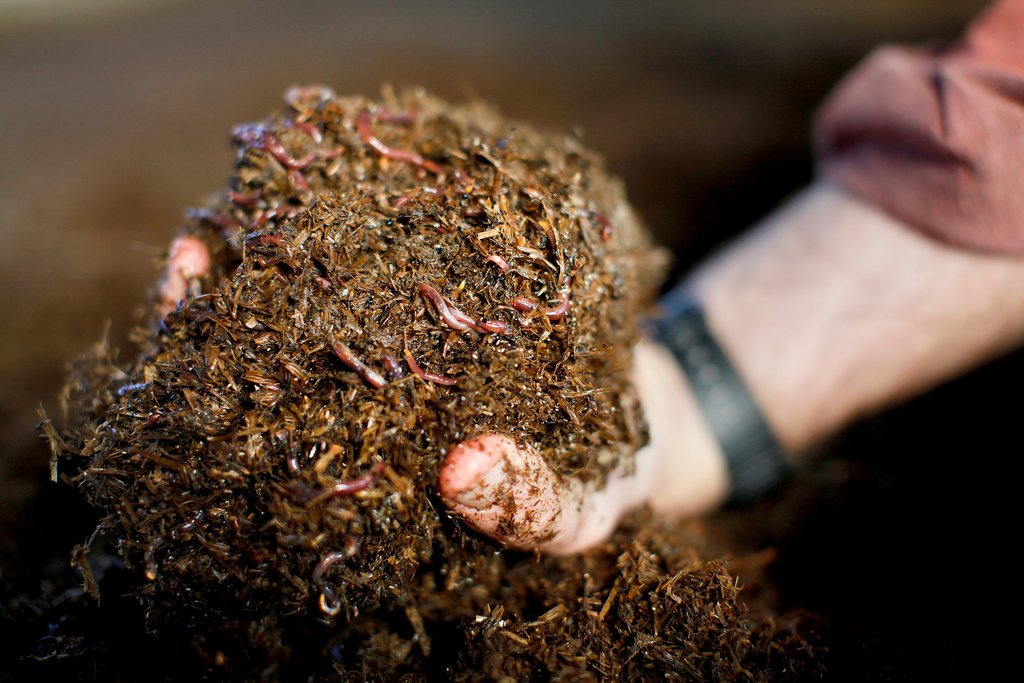 “My buddies all had planes and boats,” said Mr. Chambers, 60, a former airline pilot. “I have a worm farm.”

Mr. Chambers’s two decades of investment in what he calls an “underground movement” may be paying off. New research suggests that the product whose manufacture he helped pioneer, a worm-created soil additive called vermicompost, offers an array of benefits for plants — helping them grow with more vigor, and making them more resistant to disease and insects, than those grown with other types of composts and fertilizers.

The earthworm’s digestive process, it turns out, “is a really nice incubator for microorganisms,” said Norman Q. Arancon, an assistant professor of horticulture at the University of Hawaii at Hilo.

And these microbes, which multiply rapidly when they are excreted, alter the ecosystem of the soil. Some make nitrogen more available to plant roots, accounting for the increased growth. The high diversity and numbers of microbes outperform those in the soil that cause disease.

Worm Power, a company in Avon, N.Y., transforms 10 million pounds of manure from a single dairy herd each year — about 40 percent of the cattle’s output — into 2.5 million pounds of vermicompost. Tom Herlihy, a former municipal waste engineer who founded the company in 2003, says it has raised more than $6 million in venture capital and $2 million in grants for research, much of it at Cornell University.

Here in Northern California, Mr. Chambers’s Sonoma Valley Worm Farmproduces about half a million pounds of similar compost, an amount he plans to increase in the spring. He loads a long metal bin with cow manure and 300,000 to 400,000 Eisenia fetida, or red wigglers — weighing 300 to 400 pounds. In their wake, the worms leave cattle waste that has been processed into rich and crumbly castings that look like fine peat moss.

It takes six months for a vermicompost bed to become fully mature, by which time a million worms roam the manure. Mr. Chambers continues to add two yards of manure and harvest one yard of worm compost weekly. The finished product is shaved, an inch at a time, off the bottom of the bin. An established bed can go on this way for years.

Both operations pre-compost their manure before they fork it over to the worms. That means piling it up and allowing it to get naturally hot enough to kill unwanted seeds and pathogens like E. coli.

The properties of worm compost are different from fertilizer or manure. “It’s interesting and complicated,” said Rhonda Sherman, an extension specialist at North Carolina State University who has taught vermicomposting around the world for more than 30 years and who holds an annual conference on the subject.

A West Coast company, California Soils, uses worms to break down cardboard waste fibers that are too short to be recycled. The glue used to bind the paper serves as an important source of nitrogen for the worms. “It’s a really good product for nut farmers and stone fruit farmers,” Mitch Davis, a company spokesman, said of the compost, adding that it also helps control nutgall, a fungal disease that afflicts walnut trees.

Worms were said to be Darwin’s favorite organism, and for good reason: it seems they can break down most anything. Studies have shown they can detoxify soil with cadmium, lead and other heavy metals.

Another product made from worm waste is a concentrate, sometimes called tea, that Mr. Chambers extracts using an aerator. Dr. Arancon said even a 1 percent solution of the extract had the same properties as vermicompost.

At Cornell, Eric Nelson, a plant pathologist, is studying how compost suppresses disease. Worm Power’s product, he says, does a better job than traditional compost, perhaps because the worm compost is highly uniform. “The key is understanding why these microbes do what they do,” Dr. Nelson said. Then, perhaps, the mechanism can be enhanced, he said.

The worm compost is considered valuable enough to fetch almost 10 times the price of other composts.

Still, the industry suffers from image problems. “It’s hard to bring it out of the ‘It’s cute to have a worm box in my backyard’ approach and put it on par with other strategies for waste management,” said Allison Jack, who earned her doctorate by studying vermicompost at Cornell and is now teaching at Prescott College in Arizona.

The quality of products varies widely, and because there are no industry standards, anyone can call a product vermicompost.

For a time, the worm business was a haven for swindlers. Companies would sell worms to growers, who were told they could raise more worms and produce vermicompost, which they could then sell back. Some of these offers turned out to be Ponzi schemes.

Still, the properties of vermicompost have long been recognized by growers. Jeff Dawson, the curator of gardens at the Round Pond Estate winery in the Napa Valley, swears by Mr. Chambers’s castings, which he has used for more than a decade.

“A cup or half a cup in the hole as we plant each vine increases the vine’s ability to establish itself at a much faster pace,” Mr. Dawson said. “And it creates a healthier plant.”

This being California, some of Mr. Chambers’s customers are medical marijuana growers, and he likes the way growers do business. “They hand you cash,” he said.